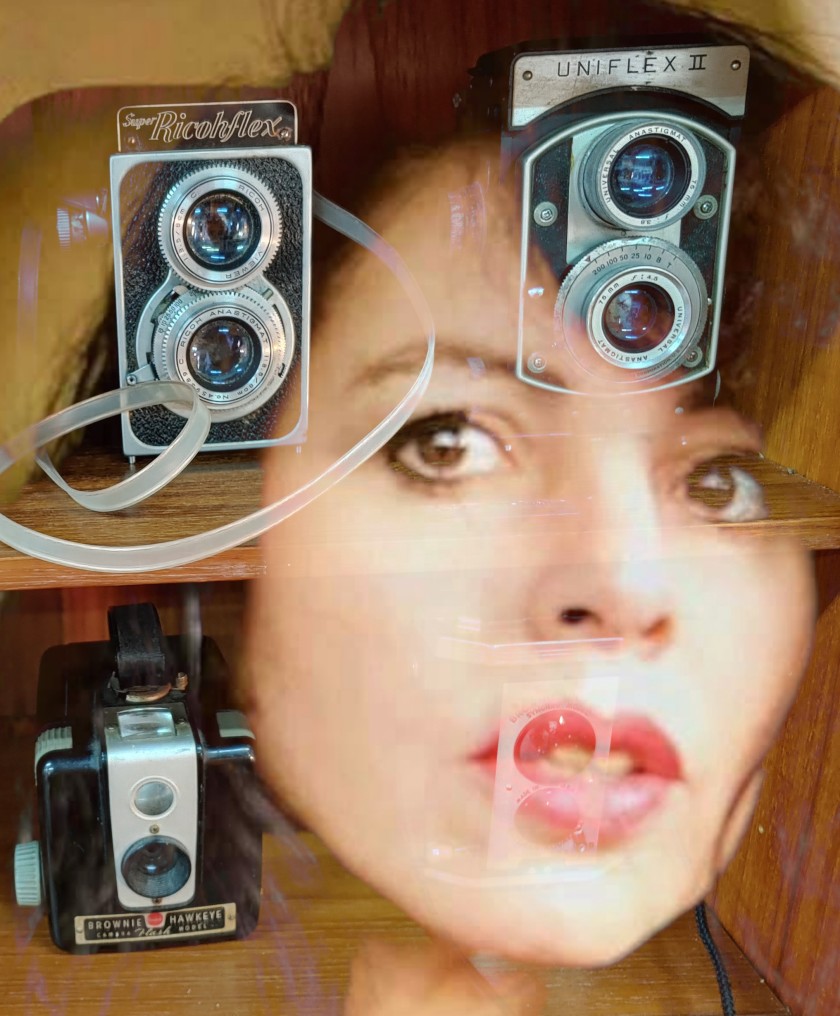 The camera sat alone on top of the bar soaking in the liquid history of past confessions, as a photographer took his place on a rusting bar stool for the first time in many years. Late at night he was the only one to join this lonely party hosted by a simpering bartender. Before ordering his drink, the photographer witnessed the bottles in the mirror presenting themselves as a photo opportunity. The image was engulfed in a fluorescent light revealing imperfections and great subtle contrasts of colors.

‘You look like you could use a drink or two,’ the bartender said in a cliché greeting.

Somehow, he was able to read the photographer who seemed occupied in the scene ready to unfold that evening.

‘Yes, most definitely, please make it a Martini.’ The photographer’s face took on the aura of a man with a story that needed to be told to anyone who would listen. As the bartender turned to mix the liquid therapy, the photographer surveyed his surroundings. In the corner sitting alone was a beautiful dark-haired woman. He hesitated. He had done this in the past, approaching a beautiful woman with his  camera as a prop. A crutch of an excuse to start a conversation and telling her she  looked like a model, which even he thought was creepy but every once in a while, the line  worked and he found a new muse for his art.

The drink was placed on the bar with a question from the bartender, ‘I guess you are a photographer? I saw you take a picture of the bottles behind the bar.’

‘Yes, but not for long, there have been strange things happening to my photos,’ the

The bartender leaned forward on the bar thinking of all the stories he had been told, but this one had drawn him in. ‘Strange things? Now you have my attention.’

The photographer took a deep sip, looked around at the woman again and began, ‘As a photographer old buildings always amazed me. The colors, the patina and the history were intriguing.  I often thought of the people who once lived or worked in these abandoned places and how they came to be what they are today, empty forgotten decrepit structures.’

The bartender unsure if he should interrupt asked, ‘This doesn’t sound strange to me, I can see how you can find beauty where others may not.’

‘My friend you have great insight, however let me tell you what has been happening. I first started to notice something strange after I took the photos and visited the buildings again. They had transformed within months after the photos.  Either the buildings were destroyed, and a new structure replaced them, or they were razed, and a weeded empty lot remained. I know this does not seem strange in itself but the events happened so quickly.’

The bartender had this look when you know someone is ready to say something prophetic or funny. Smiling he said, ‘You can take a picture of my house then I will simply wait for a better newer home to replace it right?”

‘Right you are brother, that would be something and I wish my photos could do that for you.’ The photographer looked impatient and continued, ‘My dear friend who helped me with modeling recently passed at the young age of fifty-four She was the one who originally got me interested in photography and I have missed her every day since her death.’

The bartender began to look around for any other customers who might need help as a way to ease himself out of this conversation. He had heard many alcohol-induced stories and this one was the strangest, so he answered, ‘I am so sorry for your loss and I understand how you think you might have been at fault just because you took her picture, but you know that is not the case, right?’

‘I want to agree with you but there was another girl.’

The bartender was stunned and in a weird way felt like not knowing what to say when someone knocks on your bathroom door.

‘Yes, just recently so no more models in my photography ever. I also just want to give up this art as it has cursed me and all I have touched. I will never use this camera again.’ With that declaration the mournful photographer and his past memories would probably be too much to overcome. Was it an admonition that some dark force had overcome either his camera or him?

The camera on the bar was looked at for the last time. The final photo of those bottles in the speculum held a surprise. With the angle of the shot, the photographer noticed a mistake and his face was in the photo from the mirror reflection. This final photo held an ominous future for him. Horrified and looking down, anxiety overcame him. His own image from the camera of doom seemed to be mocking him. Would his future now be forever changed by this apparatus?  His obsession that somehow, he was responsible for the death of others had haunted him, had clouded his thoughts and turned back on him in his subconscious beliefs.

‘Are you ok?’ the bartender asked.

In a rush the photographer slapped a 20-dollar bill on the bar and as he quickly got up and said, ‘Thank you for listening to me, I do not feel well and have to go.’ As he was leaving, he heard, ‘Hold on, you forgot your camera.’

Carl Scharwath, has appeared globally with 150+ journals selecting his poetry, short stories, interviews, essays, plays or art photography (His photography was featured on the cover of 6 literary journals.) Two poetry books ‘Journey To Become Forgotten’ (Kind of a Hurricane Press).and ‘Abandoned’ (ScarsTv) have been published. His first photography book was recently published by Praxis. Carl is the art editor for Minute Magazine, a dedicated runner and 2nd degree black- belt in Taekwondo.